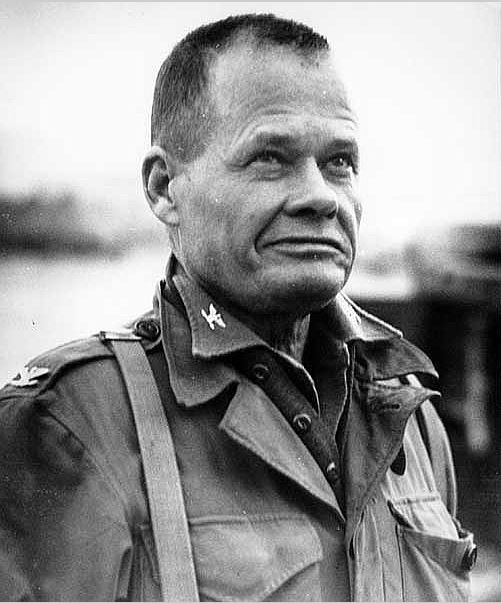 Lieutenant General Lewis Burwell “Chesty” Puller, was the most decorated Marine in American history. He was one of two United States servicemen to be awarded five Navy Crosses and one Army Distinguished Service Cross.

Puller retired from the Marine Corps in 1955 after 37 years of service. He lived in Virginia until his death in 1971 at age 73. In was during WW II and the Korean War that that he was decorated for his leadership and for numerous acts of bravery.

During the Battle of Chosin Reservoir in Korea, Puller’s forces became encircled by over a 120,000 enemy troops. The enemy were under orders from their leader, Mao Zedong, to destroy the UN forces.

His succinct and transparent assessment of the Chosin Reservoir situation was one for the history books. Upon the realization that they were completely surrounded, Puller declared; “We’ve been looking for the enemy for some time now. We’ve finally found him. We’re surrounded. That simplifies things.” Clearly his problem statement, coupled with the realization that his options were rather simplified, could not have been more understated. In the end, Puller was credited for his part in leading his troops to breakout and subsequently escape the entrapment.1

Unlike Puller’s assessment of his limited options, our modern lives seem to present us with an endless series of digital options for which we may choose. These options are found in our social media, video content, gaming, etc., are so numerous that they seem only to function as a fragile shield from reality.  Yet they offer little in the way of lasting value, instead they’ve become a facade of life, bringing only the allure of escape from our difficulties without actually contributing to anything of lasting value.

In some ways these digital options have led us to live out a life of dissatisfaction. They genuinely keep us from welcoming that deep contentment our souls really long for. Product advertisers work hard to continue our slide into dissatisfaction with waves of sound bites, ads, video clips and the alike, all aimed at one message: “The solution to your dissatisfaction in life lies in the purchase of our product or service. Buy it and you’ll have the contentment you’ve been seeking.”

Have you ever seen yourself in this situation? I know I have at times. It’s easy to drift into this labyrinth of distraction because we are surrounded by the constant message that we should be discontent with life.  But I want you to know that there is another path to choose that will lead to real, deep, and true contentment in this life. It’s a path found in a single choice, yet it offers us an eternal peace and contentment that reaches deep into our souls.

The scriptures speak about this deep contentment. The Apostle Paul wrote:

“I have learned the secret of being content in any and every situation, whether well fed or hungry, whether living in plenty or in want.  I can do all this through him who gives me strength.”

Paul was a man faimular with living life in times of good and in times of bad. He also suffered a medical condition that he asked to God to resolve, but the Lord didn’t heal him. Instead the Lord told Paul; “‘My grace is sufficient for you, for my strength is made perfect in weakness’ “(2 Cor. 12:9–10). You see, in this one act, the Lord revealed to Paul the frame of mind that he needed to carry with him in life. He was to find his contentment, not in his being perfectly healthy or in the many things of this life, but singularly in his dependency upon God’s grace for living out each day.

Long before Paul’s time, King David penned the first sentence in one of the most recognized Psalms ever to be recorded in all literary history. He wrote: “The LORD is my shepherd; I shall not want“ (Ps. 23:1, emphasis mine)

For King David, all he needed was one thing, and he found that in God. Here was a King who could ask for anything, and I’m sure he had many options to choose from. But he saw only one option, and that was the option to love the Lord, and only the Lord with all his being. God was central to his life. He realized that true contentment could only be born out of a genuine relationship with God. With God at his side, he could live his life fully content, without want, because he knew God would provide for him.

Let’s face it, contentment is learned from experiences in life, and when we’ve found the true source of contentment, it will lead us to the ability to conquer circumstances and situations, rather than be conquered by them. The critical factor is in understanding where we get our contentment from. With real contentment we’ll be able to live out our lives with attitude that is the exact opposite of living with worry and anxiety.

“Not that I am referring to being in need; for I have learned to be content with whatever I have. I know what it is to have little, and I know what it is to have plenty. In any and all circumstances I have learned the secret of being well-fed and of going hungry, of having plenty and of being in need. I can do all things through him who strengthens me.” (Philippians 4:11–13, NRSV)

Outside of God, many fall into the trap of believing our contentment will come when we have more power, money, perfect health, the model family, the latest fashions, a new car etc. The desire to seek all these things overwhelms our senses with endless options that we must process each day. Living our lives this way simply ramps up our personal stress and anxiety. Mostly because our point of comparison (Other people, fashions etc.) are in continuous flux, which invariably leaves us in a disjointed state of contentment. Yet, if we were to practice contentment and rest in the Lord, the way he would desire us to, then the things we would focus on would be simplified considerably and we would experience true inner contentment, independent of life circumstances.

Does seeking our contentment in the Lord mean we isolate ourselves from the world around us, that we are not allowed to enjoy the pleasures of life that God has given us?

There is absolutely nothing wrong with enjoying the blessings of God. Thomas Kempis said it well:

“Use temporal things but desire eternal things. You cannot be satisfied with any temporal goods because you were not created to enjoy them. Even if you possessed all created things you could not be happy and blessed; for in God, Who created all these things, your whole blessedness and happiness consists.”-(Thomas à Kempis 1380-1471) 2

What are the important and eternal things?

How about relationships? The very first one of which is our personal relationship with Jesus, without which we are unable to achieve lasting contentment. When our relationship is right with God, then every other options becomes clearer and their relative importance becomes easier to discern.

The bible encourages us to invest in the lives of those around us, whether they be our family, co-workers, neighbors, the recently arrived immigrant, or simply a person we bump into during our day to day activities. (Matthew 19:19)

When our relationship is right with God we can be at peace with all other relationships, even if the recipient is not receptive to us. The point is, we can live contently, because all of that extraneous stuff now falls within the purview of God, it’s really beyond our control. We cannot control how others respond to us, we can only control how we respond the them.

The same principle applies to life. I cannot always control my health situation, I may be able to influence it, but in the end I must remain content, knowing, that from an eternal perspective, my health is covered by God already.

Choosing to be content in the Lord is to simplify our options to the things that really matter in the grand scale of eternity. With God, we have contentment despite our life circumstances, and with that contentment comes a degree of peace for which nothing else compares.

Donald on Dining in and Out.

We are all Family

Strengthen the believer. Answer the critic.

Growing Closer To Christ From The Inside Out

inspired by a true story.

If you think these letters of faith, hope and love are for you, they are. Get involved and find yourself at home here in our tribe.

I be workin on my fitnezzzzz

this is a happy place