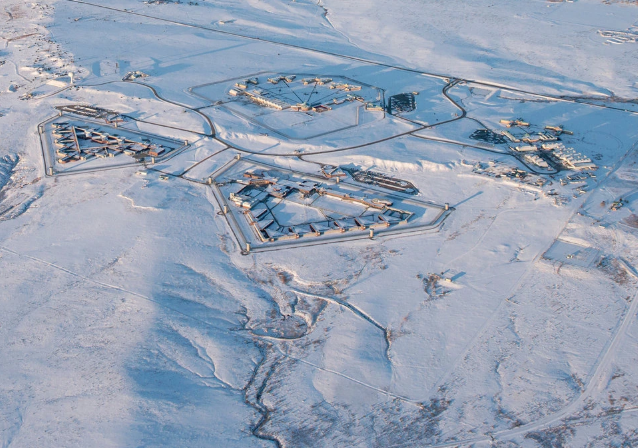 Known as the “Alcatraz of the Rockies”, The United States Penitentiary, Administrative Maximum( ADX), is prison just outside of Florence, Colorado. It was built in 1994 at a cost of $60 million dollars. ADX was designed to house the worst of the worst offenders. Most prisoners enter ADX with multiple life sentences. They’re the kind of people that even other high security prisons don’t want to be responsible for.(1)

The prison itself exists in a desolate geographic area, designed such that once inside, a person loses all sense of direction. There are no windows, except a few small openings facing the sky directly above. Inmates spend their days in 12-by-7-foot cells with thick concrete walls. Each cell comes equipped with a set of double solid steel doors, thus preventing inmates from seeing or communicating with one another. Inmates are permitted solo workout sessions in an indoor “gym”, a windowless concrete cell with a single pull-up bar for up to one hour per day. (2)

All meals are provided via a slot built into the interior door, visible only after a guard opens the exterior door. Inmates sleep on concrete slabs covered by a thin mattress. The exterior of the prison is surrounded by a series of twelve-foot fences festooned with coils of deadly sharp razor wire. The facilities and grounds are covered with thousands of motion detectors, cameras, and pressure-sensitive sensors. This is not a place anyone would ever wish to end up in. It was once described by former warden Robert Hood, as a “clean version of Hell.” To date, no serious escape effort has ever been attempted much less succeeded.(3)

The future is bleak for those incarcerated in ADX. A hopeless place to spend the balance of one’s life. The only way an inmate leaves ADX is after they’re dead. They will never again taste the freedom that was once theirs.

There are different kinds of prisons in this life. Some are tangible like ADX, while others are virtual and personal. Often these virtual prisons are built from the artifacts of one’s own past.

For many, our pasts can lock us out of the present. In effect, we become a prisoner, securely locked from the present, prevented from experiencing a life filled with true freedom in the present. As is often the case, many have pasts filled with hurt and disappointment. In some cases, our pasts include some form of physical or emotional trauma.

At times we can believe that we’ve conquered the hurt from our early life experiences, only to discover later, that despite our best efforts, there exists of an ember of our past which has remained alive and unquenched.

For these situations, it only takes the right set of circumstances to fan this ember into the flames of disappointment and hurt, to relive the pain experienced over a lifetime of trauma. It’s here that the abused sometimes becomes the abuser, becoming the very person they had most despised. For some, a sense of real peace about their past is often just out of reach.

The scriptures remind us of this generational cycle of hurt that so easily is passed from parents to children, often through multiple generations. God warns about such a possibility when he expressed caution to those that chose to reject and hate him. He said; “You shall not bow down to them or worship them; for I, the Lord your God, am a jealous God, punishing the children for the sin of the parents to the third and fourth generation of those who hate me,” (Exodus 20:5, NIV)

The “punishment,” or practical consequences of a parent’s choice to hate God, impacts their children, but not all children, only those children that become adults and continue to actively model their parent’s hatred towards God.(4) But when children in subsequent generations are able to break the cycle of hatred, then the effect is to experience God’s love for many generations to come:

“but showing love to a thousand generations of those who love me and keep my commandments.” (Exodus 20:6, NIV)

If you judge yourself to be held captive by some sort of trauma in your past life, and if you seek to genuinely be the one to break the cycle, then the logical question to ask is: “How does one proceed? “

In the very first step, we must surrender our lives totally and completely to God. We need to become followers of Jesus. It’s only from this relational perspective that we have the beginnings of real change available to us.

We then need to understand and apply the principles and power of forgiveness that the scriptures teach, followed by the establishment of healthy boundaries in all our relationships.

One of the most powerful tools we can use to break the cycle of hurt and to free us from our past, is found in the principles of forgiveness that scriptures call us to seek out.

Peter once explored this topic of forgiveness with Jesus, as captured by Matthew in the Gospels:

“Then Peter came to Jesus and asked, “Lord, how many times shall I forgive my brother or sister who sins against me? Up to seven times?” Jesus answered, “I tell you, not seven times, but seventy-seven times.” (Matthew 18:21-22, NIV)

In Peter’s day, there was a rabbinic perspective that one need only to forgive another three times, and then afterword’s, no more forgiveness should be offered up. (5)

At the time he was asking these questions around the topic of forgiveness, Peter was in the process of growing in his relationship with Jesus. He had observed that Jesus often approached faith in a non-legalistic way. Jesus consistently approached life from the perspective of God’s grace and love. In a way, Peter was attempting to seek out the rules around the boundaries for forgiveness. Peter clearly felt it pretty good to suggest that he might consider more than doubling the number of times one might offer forgiveness, from three to seven times!

He was likely surprised by Jesus’ response, when Jesus said “…not seven times, but seventy-seven times.” In this expression, Jesus was communicating that there are no practical limits to forgiveness. In fact, living out forgiveness was one way that the followers of Jesus conducted their lives. It’s a distinctive of the Christian faith. The backdrop of course, is found in the ultimate reality that each of us have been forgiven by God with his unlimited grace. Thankfully, God hasn’t limited the number of times he has forgiven me.

The Apostle Paul further helps us make that connection between our forgiveness to others and Christ’s forgiveness towards ourselves when he wrote:

“Bear with each other and forgive one another if any of you has a grievance against someone. Forgive as the Lord forgave you.” (Colossians 3:13, NIV)

You see, when we fail to forgive, in a way we’ve taken on the weight of the offense in our own lives. Ultimately, such a choice can’t help but become expressed in our behaviors. It impacts our hearts and our minds. Sadly, such unresolved offenses can end up driving us to becoming the person we’ve most dreaded.

God reminds us that harboring our feelings in this way is not healthy, and in the end, the offense is not ours to carry. Ours is to release it to him and to allow God to deal with the offender. Paul further shared:

Our part in this life is to act on God’s desires through faith, to prayerfully ask for his grace in our lives to forgive others, thus allowing us to be released from our past.

In all of this, we must be prepared that our release of forgiveness towards others may not result in a reciprocal response from the offender. Even as we forgive the offender, the offender may not respond in kind or even acknowledge the offense perpetrated against us.

We furthermore must accept that only God can change their hearts, and therefore their ways of living. (Just as he changed our hearts which has lead us to change our lives and enabled us to offer forgiveness to others.) Even as we have forgiven them, they may remain the person they are, and they may in some ways continue to offend us. The Apostle Paul recognized that this was possible. His counsel was to not worry about how the other person might or might not respond. The point is, you have done in faith as your Lord has asked, having forgiven the offender and having turned the matter over to the Lord for final resolution. Paul shared:

The second key step is to establish healthy boundaries in all of our relationships, but particularly with those that have or continue to offend towards us, even after we have forgiven them, perhaps multiple times.

It’s not practically possible in this allotted space to expand on this very important topic of relational boundaries. For those of you who are interested, I highly recommend the following resource:

“Boundaries: When to Say Yes, How to Say No to Take Control of your life.” by Henry Cloud and John Townsend, published by Zondervan, 2017.

Cloud and Townsend explore this topic in depth, and I believe that this topic, coupled with the application of forgiveness towards those that have offended or harmed us in our past, offer a great start towards freeing our present from the prison of our past.

Encouraging Women To Draw Closer To Christ From The Inside Out